Gagging Order Fail By Warren. Shut up! Erm.. No. 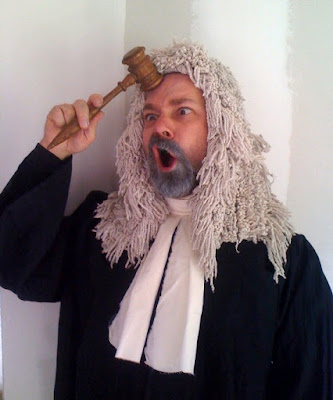 
Larry Warren went to see a solicitor recently. He want's us to stop talking about him in public. Rather than have his documents examined and authenticated with the £600 we amassed for the handwriting analysis, he decided he would go spend some money on having us silenced by the law.

Did he mention his military career, the documents, accusations of stolen valour and being what is called a military imposter (for exaggerating his service and calling himself an Ex Vet) to his Solicitor? NO! 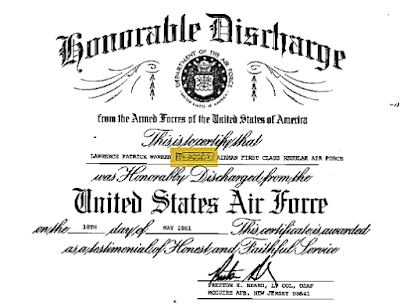 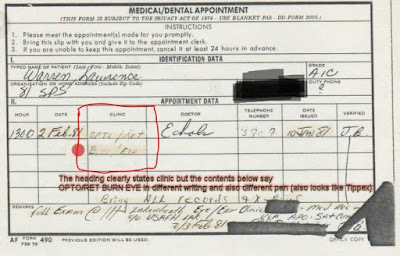 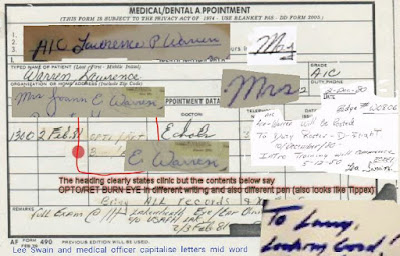 He had us all sent letters telling us for the past 18 months we have been causing damage to his rock memorabilia business. Stop talking about him, remove all mentions of him yadadada, or my client will be forced to take you to court for compensation. For MONEY.

Lets rewind.... 18 months his business has been damaged he says. What business? 18 months? No.... It is exactly 18 months since the Daily Post reported the Lennon sketch is fake as told to them  by May Pang in June 2015. So he DID sell it to Kellett then? He has denied that all along even though I knew it, have seen the actual drawing AND found copies of it on my partners laptop. 18 months is June 2015. 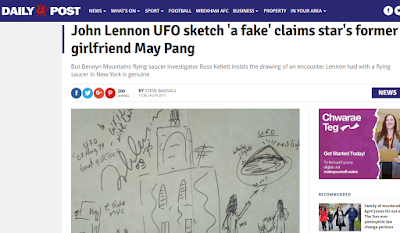 BUT I didn't start talking about all of this until February 2016 and my blogs started in 2016 so 18 months is a total lie. But it IS 18 months since May Pang said the sketch was fake. I pointed it out at a later date. So where's May Pang's gagging letter then? I just repeated the news. It's NOT defamation sharing and talking about a newspaper article. We know for a fact he was still on benefits when he sold it. He sold it while living with us.

Warren was on benefits two years ago this month. That was the month he moved in with us. I have a message from me telling him what kind of benefits he might be entitled to. This was when I assumed he had a PTSD diagnosis and I could help him apply for disability as John Burroughs had his own success in proving his health was damaged while in service. 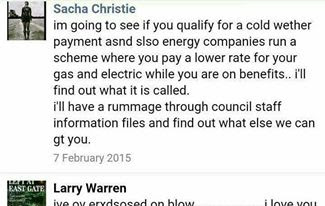 I also had a curious message from Peter (below) asking me what diagnosis Larry had, specifically. I replied "I have been telling him to go to the doctor and tell him about his PTSD". Larry, a grown man who says he runs his own business needed me to sort his benefits out. When he lived with us he was on ESA for a bad back but was thrown off it the week he moved in with us and put on Job Seekers Allowance. Kilroy says.. What? No OPTI/RET/BURN, PTSD or heart issues? No. Why is Peter asking ME? Hasn't he known him 30 years? 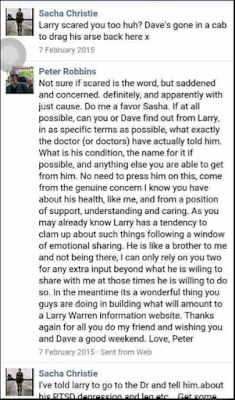 In November 2015 he sent me "You're so fucked best move....... bless" which is FIVE months after the daily Post article and only fourteen months ago. Then there is the massive factor that HIS BUSINESS DOES NOT EXIST. However we have proof of his sales going all the way back to 1995. More recently we have a lot of proof from 2011, 2013, 2014, 2015. Tens of thousands of pounds.  So his business better check out eh? VAT records possibly, he has earned enough.

Definitely Tax records should exist, he should be registered as a sole trader etc. Basically... He better have  six years worth of evidence of his business existing and he must have been lying when he told us he was in receipt of benefits and pretended to go sign on every other Monday then? So he did have money then because he had a business? Wait? What?! Hmmmm. 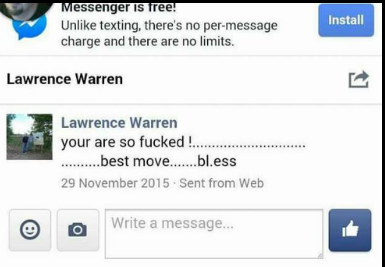 So now we are at eighteen months since the sketch he says he didn't own was outed as fake, but that's the start of the damage to his business and it isn't damaging his business because it doesn't exist, I am not sure if I can repeat that enough. I find it very strange he didn't mention his military documents or his public career in any way shape or form. He thinks as a public figure he can make statements and then have them silenced for proving him wrong. Doesn't work like that defamation isn't defamation if it is true. It is the truth.

He sends out the letters banning us from talking about him, yet carries on talking about us through other people after being advised not to talk about me by his own solicitor. Then he sent Ben Emlyn Jones his copies of our letters marked private and confidential and posted them up on Facebook!!! Strutting about "I haven't done anything wrong..." Facebook removed the post. Privacy laws exist. The others want to know how he ended up with their addresses, So does Alyson. has Gary provided them? Data protection laws exist. 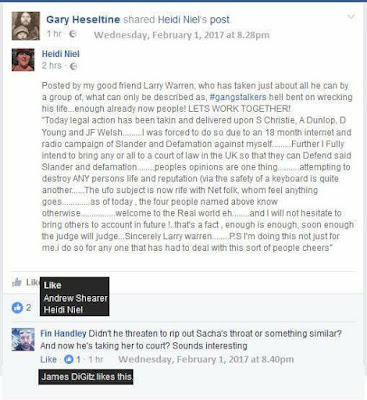 They are behaving like a desperate a mess. Ben said they were sent to him redacted, Oh we will just take your word for that then. for all we know he has sent unredacted copies to everyone on planet Earth, after all he set the entire internet on Barry Greenwood and stated he must be living in the woods if he isn't replying. Not he is ignoring a man who set the entire internet on him by requesting everyone email Barry Greenwood in his Is Larry Warren a Fraud HPANWO blog series.

Who redacted them? Warren says computers are witchcraft and celebrated being able to use skype on a radio show.  Well done that man, how did he manage to get a BA in communications if he can't spell, type or even Skype? Well we know he didn't, someone asked them and they've never heard of him. The 'other' school in connecticut has NEVER handed out BA's, Someone checked that out too. So someone else redacted them so whatever he says, they were not kept private and confidential and anyone and everyone could have our home addresses now. Whats up with them cries Susan McAllister, warrens ex wife, "The addressed weren't on the letters posted on the net"! Really??

Private and confidential means just that. How would she like it if we started telling people where she lives? Exactly. Shoe on the other foot as a MOTHER. Especially seeing as he keeps referencing me being shot, dealt with NYC style real quiet like, March chapman is mentioned a lot in conversation about me, he shot John Lennon in the street. My house can burn down and you're so fucked, best move...... bless. He has fantasised about me being murdered a lot and all in public. Facebook removed the post. 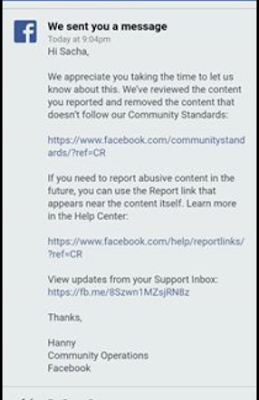 I am being dramatic worrying about my home and my children am I? No I am not. this is terrorism.

Everything they conjure up is twoddle. Ben accuses me of working with people nobody knows... All new to the scene says Mr Ancient Alien. Erm... No one knows your current tribe either Ben and you don't know because I don't tell you. I love surprises. You just think you know and all you have at best is guess work based on gossip from liars and no, of course I didn't do anything with you (boo-hoo poor baby) I would rather eat my own feet with a napalm dip than do anything with you.

To reiterate; Its a letter from a solicitor based on a lie, of course no one is going to pay attention. It isn't a writ it's a piece of shit. Worthless. Get it? Got it? Good. No business no claim, no woman no cry. Now the ball is in Warrens court because he now has to provide evidence of this business of his AND prove the damage caused for the past 18 months when its a year in reality. The letter said if you do not comply with this our client will take you to court.

Ever heard of COUNTERCLAIM? Proof of loss is easy. He had the PROBE conference taken from me and cost SPI Scotland and extra £600 and turned up to a venue he was banned from saying in Ben's video of the drive up there "Oh I will be speaking" because he thinks he is bigger than everything. He thinks he can blag his way into and out of anything.

It turns out Gary Heseltine has been stalking my pages and sending Warren the "evidence."  He didn't protect himself and remove his name and face from his screenshots though. Neither did the solicitor.. oops!

So with this being harassment that makes it trolling, although really it ought to be called gangstalking, they are all complicit. Gary ought to know this he is an ex policeman right? Oh.. and lucky everyone because Nigel Mortimer has been booked on at UFO Truth, BUFOG and PROBE. You know you do tend to end up being busier when you retire. Am I supposed to be outraged? I don't care. I'm not paying to see him or paying for him.. Knock yourselves out! Misogyny rules KO.

So why did he avoid anything to do with Rendlesham? Why didn't he send John Hanson a letter as promised? Oh... Yeah... Because it highlights his public life which makes a massive difference to being just a guy trying to get along in a dog eat dog world man...?

WHY WOULD HE RATHER SPEND MONEY ON SILENCING US THAN HAVING HIS DOCUMENTS ANALYSED FOR NO PERSONAL COST TO HIMSELF????????????????

So its only a year, the business is fictitious. Truth is not defamation.  My toilet roll is worth more than that letter, after flushing. But if he wants to go to court, he can take me to court. We are all up for it. We are not criminals.

So on behalf of Myself, Alyson Dunlop, Ronnie Dugdale, David Young and my new best friend James Welsh it is business as unusual. See you in court Lawrence Patrick Warren.

Oh I almost forgot.. Alyson and I are recording a radio show today, It will be out this coming Saturday. I will post the link here in an update.