After recent revelations I thought I would tell you how James Francis Welsh inserted himself into this farcical charade. Until about a month ago I had never heard of this person. My first encounter was on a thread created by Nick Pope regarding Larry's ridiculous photograph with John Lennon, something I had already debunked but the point of the post was lost on everyone anyway. Nick asked if Larry was being serious when he claimed to be 19 in the photograph. I answered his question and posted more evidence from my blog which was already months old. Most people were incredulous that he was trying to pull a stunt like that, the rest set about trying to prove it was a picture of John Lennon, what night it was and where it was taken, who took it etc. All very well established facts, all included in my blogs.

He then pitched his research to Alyson Dunlop who knew absolutely nothing about what I have been doing since we fell out. 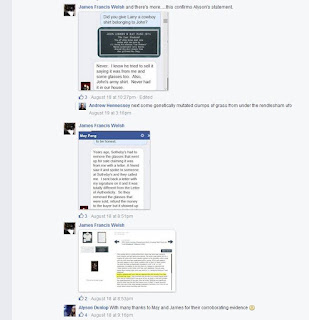 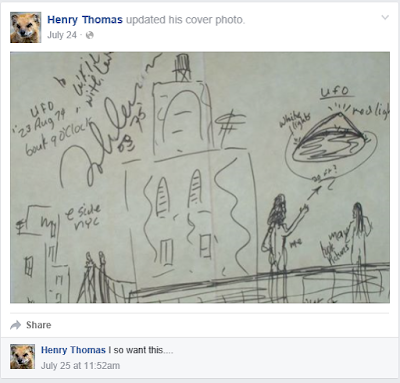 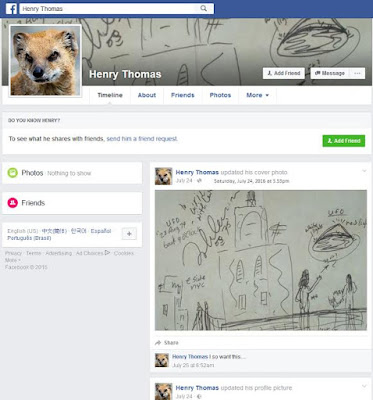 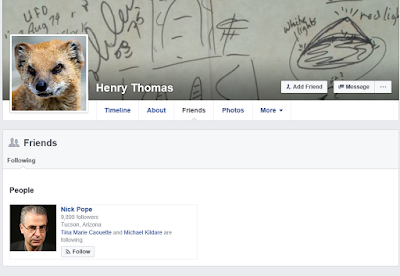 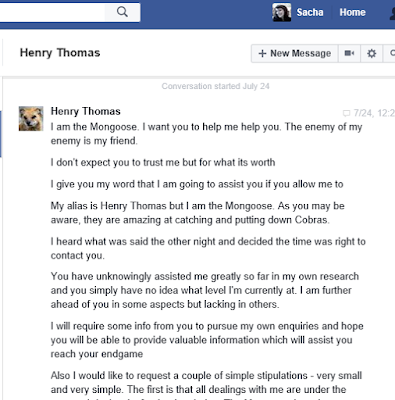 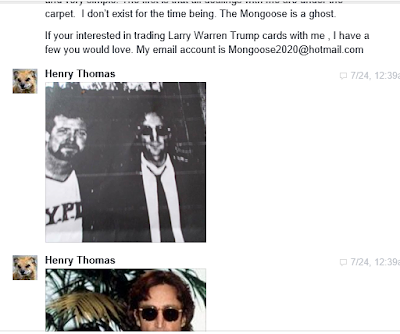 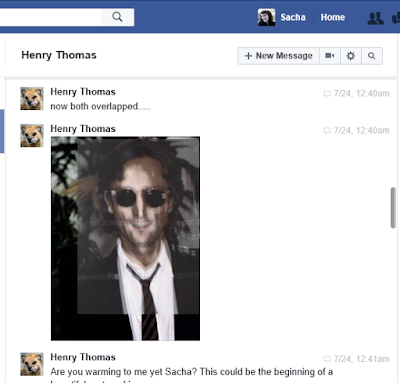 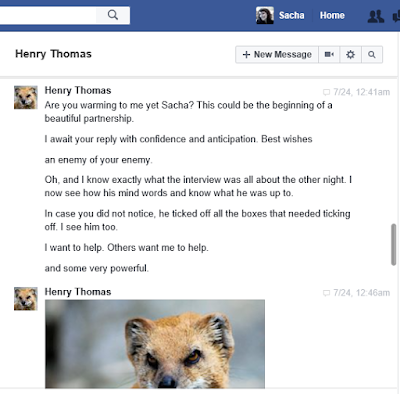 How do I know Henry is James? James also calls himself Corroborating Evidence, here is a screen shot of one of the photos on his 'pip me to the punchline blog'.. Which is so very far from that. 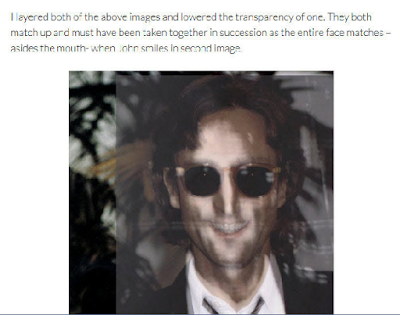 In fact his blog which was supposed to knock me down so I never got back up, is truly embarrassing. Most of the photographs included were taken from my blog and information was mined from a video I had already released, without him asking, but then publishing them as if they were his own findings! Aside from the obvious one of the properties of the file found on my partners laptop. So basically he was going to knock me out of the ball park with my own evidence that I have already released?

After reading Malice Through The Looking Glass he left this underneath it. So he tries all of the cloak and dagger stuff, ends up looking like a fratata he has that much 'egg on his face' from his own actions, then starts playing the victim.

Here is a conversation James started in  Rendlesham UFO group run by myself and my partner but thats not well known. Who was he trying to reach and what did he expect to come of this dreadful behaviour?

James Francis Welsh
can I ask who is the admin behind this page?
I have info for you mibbies
04:47

James Francis Welsh
Some very news is on the horizon for Larry Warren
I'm afraid to report
did you listen to his interview with Ben?

The Rendlesham UFO
Yes I did James
Sent by Ronnie Dugdale

James Francis Welsh
lies lies lies
are you going to UFO TRUTH CON?
cause that's what it is
Larry is in very hot and very deep water

The Rendlesham UFO
Well I know it was lies James . I have and was in that Ben radio show subject to his lies
Sent by Ronnie Dugdale

James Francis Welsh
If it wasn't him - then I would feel sorry for him but I dont
really
So he had a pop at u 2?
fuckssake

The Rendlesham UFO
Yes didn't you hear his lies about me on Alton and bens shows?
Sent by Ronnie Dugdale

The Rendlesham UFO
I'm not going to holmfirth . I see little point . Gary Heseltine is a warren supporter he is supposed to be a cop he should of Sussed him out years ago
Sent by Ronnie Dugdale

James Francis Welsh
ive got gary by the balls too
this will set the internet alight
ya I'm not going in protest
at the end of the week larry will be the outlaw hes always wanted to bee
be
even lol
he will be exiled
ive been on the trail for a wee while
and I'm sadly ( for Sacha ) going to beat her to the punch
knock out
floored
no getting back up
bless her
she opened the door
you got a link for the other interview?

The Rendlesham UFO
Ok James so when are you going to release this and how?
Sent by Ronnie Dugdale

The Rendlesham UFO
I will be amazed if you have something about warren that Sacha and I don't already know about but I guess we will have to wait and see . Are you releasing it on a radio show?
Sent by Ronnie Dugdale

The Rendlesham UFO
What radio show , I wouldn't want to miss it
Sent by Ronnie Dugdale

The Rendlesham UFO
Ok I will have to listen in .
Sent by Ronnie Dugdale

James Francis Welsh
I'm getting legal advice before going public
but hes fucked
stone dead
and probably on the run
you near Leeds?
ive got a potential meeting in leeds on fri
to buy a cowboy hat and sunglasses
much?
..................
only 95K
.....
.....
....
each!
ive alerted the fraud Squad to whats happening
sssshhhh
http://www.rareandsigned.com/

The Rendlesham UFO
I saw her apology to Sacha . It was the least she could do . How spi Scotland behaved was disgraceful. Ok so 5 days time for lift off eh James . We have caught warren bare faced lying and still he carries on . If it's warrens hat and sunglasses that he claims belonged to John Lennon and given to him by Charlie they have been proven fake . Your a bit late with the fraud squad . Sacha alerted them months ago . Have you not read her blog .
Sent by Ronnie Dugdale

James Francis Welsh
some of it
ok so two calls made to FS
good
they will sit up and take notice
they actually advised me on how to proceed
gave me tips
I am semi worried that there will be comeback
but I could take him I think
I feel bad for Peter Robbins tho
he is a friend
a good friend
but he knows what I'm sitting on
I gave him advance warning of the shit storm ahead
wana buy a tshirt?
lol
good eh?

The Rendlesham UFO
Well good luck with the show . Peter Robbins was my friend also once . A very close friend . I proof read his latest two books for him . But anyone who can sit silent as he did on add files while allowing warren to tell lies is no friend of mine. And if you have told Peter Robbins you can bet your life he has told Warren. You can take that to the bank!


James Francis Welsh
That's fine by me. gives him time to pack and fuck off forever
ive advised Larry to run- keep running and find a big rock
and stay there for at least 1000 years

The Rendlesham UFO
What with his defaced passport 😊  look forward to the show .i have to go to work

The Rendlesham UFO
http://sacha-christie-infomaniachousewife.blogspot.co.uk/2016/08/malice-through-looking-glass.html
Sacha Christie - Infomaniac Housewife: Malice Through The Looking Glass
This is a page run by me and my partner Dave. You're a snake. You ARE the punchline.
Sent by Sacha Claire Christie

The Rendlesham UFO
Oh really.  am going down. One punch, no getting up. You're right he is a snake, but so are you.
Sent by Sacha Claire Christie

James Francis Welsh
not you
Larry is getting decked
lol
ive no fight with you Sacha. None. Nada Nil. zilch.
I think you crossed wires somewhere. I only have one target in my gun sights
and it aint you.
I was speaking of Larry when I said he aint getting back up.

The Rendlesham UFO
So why are you doing this then? What has any of it got to do with you? I have already told the police. I don't know what you think you hope to achieve by acting like this. Seriously all you are doing is making things look worse and your stunt the other day asking me to apologise to Alyson could have totally wrecked that tenuous peace deal. IF I was the person they all say I am then that would have blown up in her face.
Sent by Sacha Claire Christie

James Francis Welsh
don't understand where you got the idea that I wanted to deck you.

James Francis Welsh
please take a deep breath. Your not the only one with an axe to bear
I'm going to beat you to the punch- i.e. expose Larry

The Rendlesham UFO
You have no axe to bare.
He has already been exposed
you are too late
Sent by Sacha Claire Christie

James Francis Welsh
ok, sorry for stepping on your toes
but I have an axe to bear
you think I'm ok with him being flown all round the world to do talks when he is a fraudster?
he is a cancer

The Rendlesham UFO
the hat and glasses are nothing. I have twenty items at least I am dealing with. I don't know what you think you know that I don't. I am also talking to May but I had the courtesy to respect her enough to ask if she wanted this keeping private, which she did. You haven't stepped on my toes. To step on my toes you would have to be in front of me but you are not. You are way behind. Sorry to pop your bubble. Your behaviour is shamefull. I am embarrassed for you.
Sent by Sacha Claire Christie

James Francis Welsh
ok. I'm too late, but I don't see you having exclusive rights to being the only investigative writer out there

The Rendlesham UFO
No not exclusive rights at all.. Just come up with something new if you are going to do it.
and all this sneaking about shit. it is pathetic. end of conversation with you.
Sent by Sacha Claire Christie

The Rendlesham UFO
These are tears of laughter, trust me.
Sent by Sacha Claire Christie
This person isn't receiving messages from you at the moment.

After everything he has done, he accuses me of being poison and as bad as Larry Warren!!! 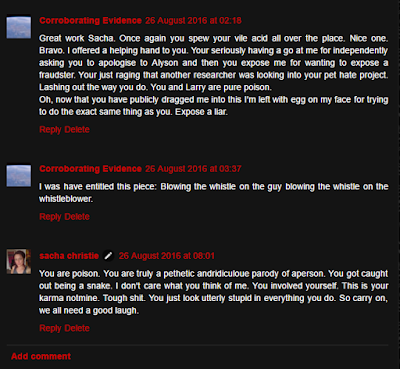 Then there is all this nonsense 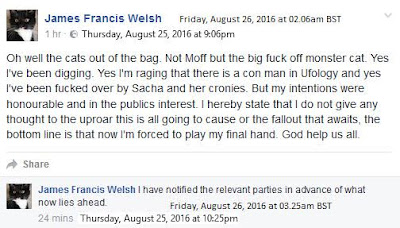 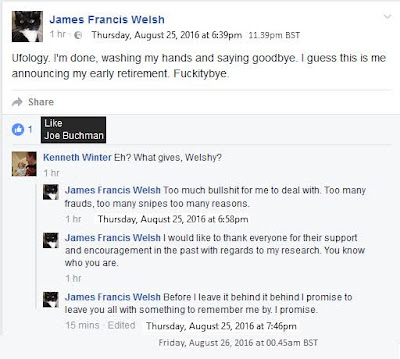 Used as a pawn? How? HE instigated all of this, tried to set me up, beat me to the punchline. He sent messages about the John Lennon issue to a Rendlesham UFO group which just happened to have been set up by my partner. He then tells my friend Ronnie Dugdale of his nefarious plans then whines like a little bitch when caught out.


James. Your name is James Welsh not James Bond. Grow a pair and find some integrity while you are at it. Have you no shame?

So here it is. James' epic revelation. Its scant at best with handwriting additions added very recently. This is James' research don't you know. Nothing to do with what I am doing.

Thievery, antagonism, the same old shitty behaviour that causes all the problems in ufology. This is not a solution, this is not respectful. Its unbelievably crass and really quite pathetic but absolutely typical.

Go find your own life to live Welshy.


Prepare to be dazzled. Corroborating Plagiarism, The Evidence

After all the bragging and showing off..... He doesn't want you to read it. I think you have to be extra special.

Posted by Sacha Christie at 19:36 No comments: