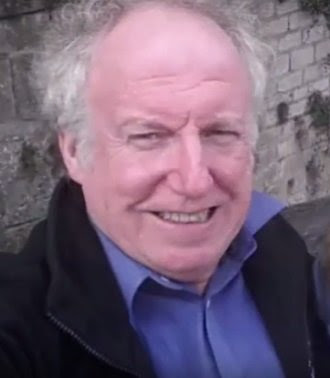 Today I logged online and found messages telling me Miles Johnson had uploaded a video of me. I went to look. It was filmed in 2011 when I had a very different opinion on the Rendlesham Forest Incidents. Back in 2011 I was a Larry Warren supporter. I believed him and so I believed his version of events. Fast forward to 2015 and all of that changed.

I saw him for what he was and I saw what he had done. He had stolen Adrian Bustinza's account, replaced John Burroughs with himself and replaced Col Halt with a mystery officer. If you know John's version of events and Adrian's, you will know that they were both with Halt, even though John wasn't on duty, he was present. Read Left Out At East Gate to see Adrian Bustinza thanking me because the truth surfaced through myself and others, those of us who listened with an open mind.

As you can imagine, seeing an 8 year old irrelevant video uploaded just now is a bit strange isn't it? Hmm... Not until you realise it is the day after an article I wrote about Warren appeared in Outer Limits Magazine. When you read the blurb under the video, it raises even more suspiscion. Lets face it everyone knows I fell out with Miles, a few times over. Once upon a time I thought he was a really honourable person and I really respected him. But then I used to poo my pants several times a day, but I was a baby then and a lot has changed since I did that.

Here is the blurb;

Sacha Christie one of Britain's most enigmatic and wonderful characters in the Rendlesham story, gives a blast of energy and strife, and the exclusion of Larry Warren from the extremely strange and important events at Rendlesham Forest of many years of UFO events. Interviewed by Miles for Ammach-Bases , with Joanne at the early part of that co-operation in 2011. This is the section focused on Rendlesham, and Larry Warren. originally released as a Bases AMMACH 2 part interview in 2011. at time of pubication in 2019, things have become chaotic as the Capel Green film is about to be released

A lot has changed in the past 8 years too.

Here is a little video just for you Miles seeing as you ignored my attemtps to contact you via Skype today.


If you really think that of me Miles, prove it. Lets do another interview about the Rendlesham 'story' because this is well out of date and you know it.


when I logged onto my Sacha Claire Christie Facebook account yesterday I saw I had a friend request from Miles Johnson. I accepted it and posted this blog on his page. Did he read it? Nope. He did however send me a message. I rarely use that account anymore so I had no idea these had been sent.

He thinks I am wonderful and as an ET experiencer he gives me his support. Well that lasted about five seconds.

I asked him what has 5G got to do with the fact he has posted a video up that is 8 years old and I no longer think the same as I did? What was his response after his misogynistic fawning? 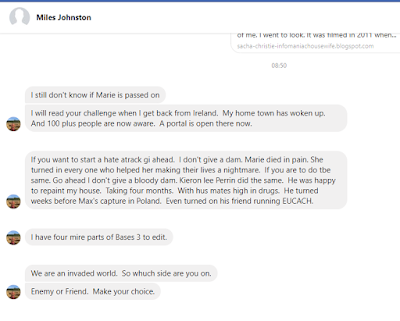 Well Miles it certainly isn't friend is it? Not after that. Plus I do not believe that he has no idea of what has happened between myself and Warren after what he wrote under the video he posted on YouTube. specifically this bit;

"originally released as a Bases AMMACH 2 part interview in 2011. at time of publication in 2019, things have become chaotic as the Capel Green film is about to be released"

Non of the people I have spoken to believe he is doing anything other shit stirring. I also want to know what he is alluding to here. I tell him he needs to interview me again and he goes straight into the not bothered routine and Marie is dead, so the same if you wish... I can be his friend or his enemy?

So we have to ask the question, is Marie Kayali actually dead. If she is, we know why don't we?

If someone can find out is she is okay I would be grateful, all her recent YouTube videos are gone and she hasn't posted publicly on her page since 11th of July.

Miles Johnson... You do not scare me. Not for one second.


since writing this article it has been brought to my attention that there is a distinct possibility that Marie Kayali has taken her own life. I pray to god that this is just a horrible rumour. If anyone can help me find out I would be grateful. I know Marie was very agitated by the situation she was in and I understand her lack of trust completely. I didn't believe there was anything I could do for her and i assume she felt the same way otherwise she would have spoken to me about what was going on. I believed she had other women around her who were supporting her.

This is an appeal for information, any confidentiality will be assured. Thanks in advance.

Look at this. May she be at peace? From HIM?

From the scumbags of the internet? 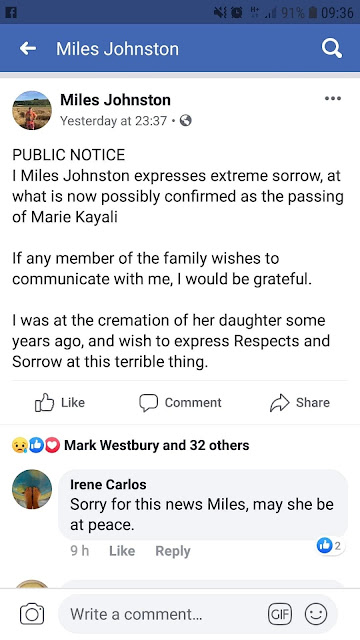