Disgraced former Transport Cop Gary Heseltine says Capel Green popped up out of the blue, but Dion Johnson tells us Capel Green was made because of The Larry Warren Fraud Investigation. 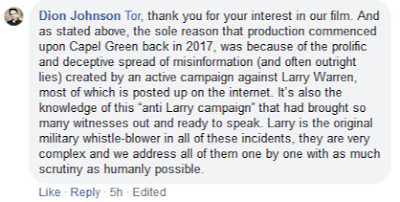 On Saturday the 10th of August yet another teaser post was put up on the Capel Green page. Dion Johnson stated;


" It should be said, that the sole reason that production commenced upon Capel Green back in 2017, was because of the prolific and deceptive spread of misinformation (and often outright lies) created by an active campaign against Larry Warren, most of which is posted up on the internet. It’s also the knowledge of this “anti Larry campaign” that had brought so many witnesses out and ready to speak. Larry is the original military whistle-blower in all of these incidents, they are very complex and we address all of them one by one with as much scrutiny as humanly possible."


Interesting because Previously, Gary Heseltine stated that this film project came out of the blue. He has always maintained that I have been attacking him and the movie, everything I am doing is because of the movie and that I am Gary Heseltines troll.  Gary didn't even open his mouth for 18 months and I have assured everyone a thousand times that this is not about Gary or the film Capel Green. I have been told by one of the participants in Capel Green that the film isn't even about Larry Warren, it is about the other witnesses. Oh really?


A bit weird then that Dion would say that isn't it? That the film was born because of me outing Warren as being the liar that he is.  So how can any of what I am doing be about the film when I outed Warren in 2015 and the first whiff of Capel Green was in 2017? 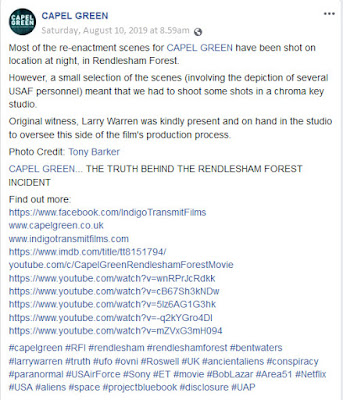 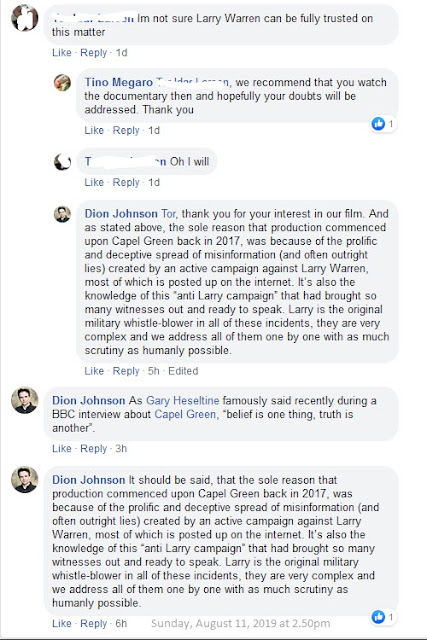 But Gary knows what he is doing, he is trained in advanced interview techniques and knows all about body language.

Bring on the scrutiny!!! Not one of them has done any of the research they claim to have, they can't even tell the same stories as each other. Capel Green is a total con. Not one of the witnesses in that film was with Warren. They did not all come out to support Warren, they came out to tell their own stories and had been doing for a long time. They are not new witnesses who have never spoken out before as they state in the blurb.

Warren did not blow the whistle on this event. How could he have if Brenda Butler was already
investigating before he showed up on the scene? Listen to him saying it in the clip below. Taken from the Randle Tape, but if you don't know what you are talking about, will have no significance.


Read this blog, How the RFI Whistle Was Really Blown written by Ronnie Dugdale, who after Brenda Butler is a leading Rendlesham researcher here in the UK. By far the most knowledgeable person in this country on the incidents. What those two people don't know, isn't worth knowing.

Also, it is a TRUTH campaign not an anti Larry campaign. Only an idiot would call it that after the reams of actual PROOF of LIES has been presented. But if you don't read my "shit" then how could you know anything about anything?

I can only apologise that Capel Green is actually all my fault and if I hadn't outed Warren, greedy guts wouldn't have seen £££ signs and started this absolute con on the UFO community.


Posted by Sacha Christie at 19:35 No comments: