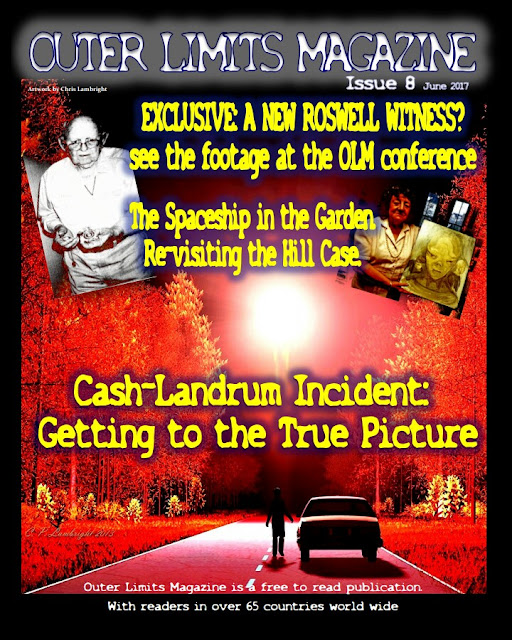 To read your free online copy of this edition of Outer Limits Magazine go here. Contents are listed below. 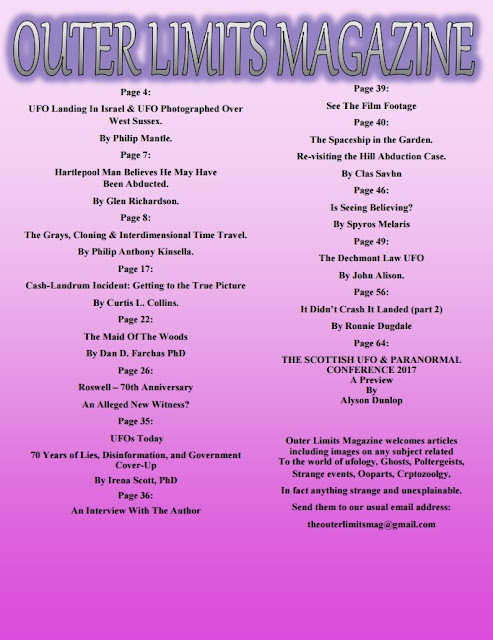 Also, in September Chris will be putting on his first ever Outer Limits Conference which has familiar faces and new! Paul Sinclair will be speaking. This is his new book which is a collection of UFO and other high strange stories from North Yorkshire. 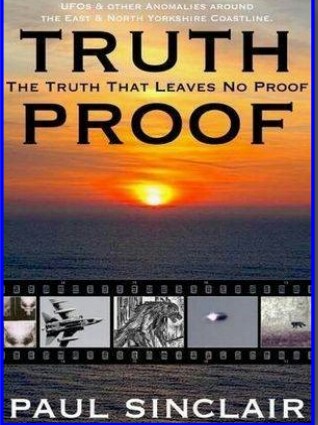 PDon
Outer Limits Magazine and Ticket Purchases
the worm turns. Hopefully I will be seeing you there too!


Tickets are selling fast for the Scottish UFO and Paranormal Conference 2017 in Falkirk this year!

Email spiscotland@gmail.com and order yours today! Don't miss out!
We have a fantastic line up of guest speakers, bringing you a fountain of knowledge on the weird and wonderful world we live in.

On the 8th July this year top lecturers, researchers, investigators, and experiencers will be right in the heart of UFO country presenting their evidence. You'll also have the chance to meet and mingle with like-minded folk.
SEVEN experts in their fields, talking about UFOs, the paranormal, areas of high strangeness, angels, aliens, and spirit communication.

Plus, a raffle and stalls with a wide variety of paranormal memorabilia, including vintage magazines and books.
All this live from the Falkirk Triangle! AND only an incredible £10 for the entire day!

Falkirk has excellent transport links. It's only 20 minutes away by train from Glasgow and 30 minutes from Edinburgh. So, we're very easy to get to. It's going to be a fabulous day.

I look forward to seeing you there!

Posted by Sacha Christie at 10:18 No comments: Links to this post

Think About What Larry Warren is Saying 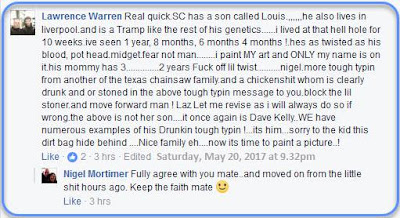 The photo above comes from a man who say's he is taking me to court for slander. It's actually libel but who cares about facts. This is what Warren has done consistently for the past 16 months at least.
Not once has he provided any form of counter evidence, he just attacks me personally. He also called my mother crazy and tells everyone I am a drug addict, and a child abuser who'd madly in love with him. All lies.
We gathered enough money to have his military documents authenticated but he refused. We were unsuccessful in our attempts to have online copies analysed, for a professional forensic examination, the originals were necessary. letters of opinion hold no weight.
Warren considers this avoidance some sort of victory. He recently stated that I had altered them, that my partner had downloaded them from the internet in and from their various posts and sources and then reuploaded them. He is essentially saying my partner hacked the entire internet, all copies of all of his documents, which funnily enough match the ones in his book exactly. He has refused to show anyone where they have been altered by me and has even alluded to Peter having altered them.
He calls my partner a hacker, saying he hacked Warren's facebook account. All he has to do is provide identification to facebook to get it back. He states all his proof is on that account and he could prove us all wrong but lo and behold, he 'can't' because he refuses to provide identification to facebook.
He also said that I am a terrorist sympathiser and a danger to the UK two days ago. A bit harsh on the back of the Manchester bombings. All he is trying to do is cause me harm. Emotionally, mentally and physically with his death threats and also suggestions to the public I need dealing with.
What was his intention by saying I am a terrorist immediately after the Manchester attacks when emotions were running high. did he hope someone would petrol bomb my home? Stab me or shoot me? Or give me a good beating. What was his intent behind that comment? It was to cause distress, to create hatred towards me from the public. It was to trigger a reaction from someone, not just me. He wants me dead.
He has accused me of fabricating or stealing all of the items I have proven to be forgeries, or at least very dubious. This is on the flip side,  saying that everything IS tampered with or forged or dodgy in some way, even suggesting with Nigel Mortimer yesterday that I had changed the signature on a fake Garcia painting Warren sold in 2013 for £8,000. All of the items were with the auctioneers for three years until 2016. HOW could that have happened?
More importantly,  Warren states he was with Adrian Bustinza all night during his alleged participation in events during the Rendlesham forest Incidents, yet Adrian Bustinza actually says he was with Col Halt and John Burroughs all night. Warren say's he was nowhere near Halt.

People ask why Adrian would not have said something earlier, considering the attacks i have had to put up with I think that question answers itself. Warren has threatened everyone in some way or another, even if they are merely alluded to. the intent was to cause fear. The intent behind his actions towards myself are to destroy me which will destroy my family too.
I have a three year old daughter, she was ten months old when he stayed with us. I have had to go through this for two thirds of her life. They call me a bad mother while trying to make me malfunction to the point where I can't be one.
It is my full belief that warrens intention was to see me commit suicide, he knows I was depressed after we went bankrupt and moved house, all while we had him living with us for free. he tried to destroy me mentally.
Ask yourself why he would go to all these lengths for all these months avoiding answering simple questions and providing evidence that would be very easy for him to do. On top of that he has paraded the twisted tales of my life on five radio shows five videos and had Ben Emlyn-Jones friend write 14 blogs all about my personal life, completely disparaging me all the way. Nigel Mortimer has constantly harassed me, I uploaded this album of some of his posts, not all. Yet he has posted tonight, on facebook, a cease and desist letter for me. I will not comply. You can see it here.
They even accused myself and Nick Pope of setting him up with a fake UFO photograph that HE uploaded to the net in 2013. All of his claims are impossible.
There are very big issues with his claims and he is not prepared to face them head on, instead he makes a lot of noise and points a lot of fingers. He could end this now just by showing the world his documents.
As far as the suggestion we all take a lie detector test is concerned, I would definitely do that. It sounds simple enough on the face of it, but think about it... Doing lie detector tests on six or seven people, or even two or three, it costs a lot of money. None of us have that to spare and he knows it. So really he knew when saying it, it would be nigh on impossible, even though it sounds easy.
He lived in our house, we heard him change stories, we saw him generate LOAs for memorabilia I believed was genuine until May Pang stated the John Lennon sketch was fake. That has been twisted by Warren into a story of me trying to wreck his memorabilia business which does not exist anywhere. We have checked all registry's. I didn't say the sketch was fake May Pang did.
I busted the A10 photo and so they said I faked it. I busted the Garcia painting, they're trying to say I did something to it four or five years ago.
Look at the evidence i have provided instead of listening to gossip. I haven't provided gossip, I have provided evidence. Please check it against Warrens claims.

Think about it.
Posted by Sacha Christie at 03:51 No comments: Links to this post