Left Out at East Gate. The truth about Adrian Bustinza and Larry Warren. 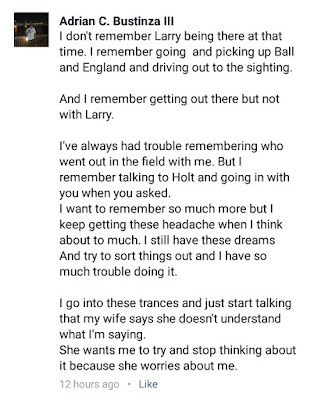 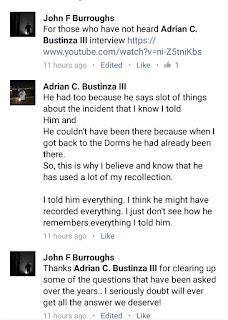 Something has come to light that proves the age old rumours that Larry Warren stole his testimony from Adrian Bustinza are true. In a recent radio interview, for the first time ever, Adrian speaks about the events as they happened to him on that fateful weekend in 1980.

He testifies to briefly seeing Larry Warren in the field. Larry told a commanding officer that people were taking photographs, he and Adrian were ordered to remove the cameras from everyone which they did. Now at this point Larry tells us that he and Adrian were together, that they were instructed to approach the bright object on the ground and walk ten paces to the left, then ten to the right. As the book Left at East Gate goes on he tells us of him being approached, told to get into a car, gassed, shoved in the foot well and then onto the building on the Woodbridge base where he and Adrian were both taken inside, shown footage of UFOs and they were told that bullets are cheap.

According to Adrian Bustinza, as soon as they had taken the cameras from people, Adrian and Larry parted ways and Adrian and John Burroughs left the scene together. What ensues is the very same story but it doesn't involve Larry and Adrian, it involves John and Adrian. Adrian says the first person he bumped into the next day was Larry Warren. Adrian was then taken alone to Woodbridge, taken into the building where the photography shop was situated. He was taken alone into a room with three men and was asked over and over again what he had seen. The officer told Adrian he was mistaken and that he had merely seen the lighthouse. Adrian argued his point for quite some time and finally asked what the consequences would be if he did not say it was a lighthouse. The reply was "Bullets are a dime a dozen, bullets are cheap". The very next thing he did was to leave a note under Larry Warrens door and then told him absolutely everything. He then called his mother. Adrian that is, not Larry.

Now Larry admitted this to me recently as we took him in when he made himself homeless. He also told me this when I asked him a question about Capel Green. He said "the craft wasn't at Capel Green, it was at the other side, I got mixed up". I was confused and asked what he meant. He repeated himself and said i thought I got the right tree but I got mixed up, it was at the other side". Still confused by what he was telling me, I mentioned a few different places in that same area, having been to the forest four times over the past 8 years with Brenda Butler, I know it well. He said "No, you haven't seen it". About three days later my partner threw him out of our home for many reasons.

It played over in my mind for a few weeks, trying to piece together what he was saying. While living here he asked me about twenty times if I had listened to the Bustinza show. I hadn't. I was saturated with it all, Larry never ever talks about anything else. I had heard enough. Recently I decided I needed to listen to this interview properly because his story started changing after it had been aired.

You don't have to take my word for it. If you know Left at East Gate then everything you hear in this interview, you will recognise as being the testimony of Larry Warren. You will realise that what you have read in LAEG is a combination of Larry's bit part and the rest is about Adrian and also John Burroughs. John was asked to walk towards the craft by Col Charles Halt while Adrian was with him, not Larry.

Here is the full interview.


Final notes for now. Recently Gary Heseltine released his findings on the analysis of Larry's letter to his mother. The only thing unexplained is why Larry doesn't talk about himself in it, he only mentions that it happened to "some guys".

He also states in LAEG that just before things were starting to happen, when he was alone at his post that the guard mount was boring as usual. Thing is... He was on his very first shift ever. How would he know it was boring as usual and why would you even say that unless you wanted to give the impression you had been there some time? Why hide the fact it was his first shift?

Also why have this incredibly violent reaction to me saying that I would be attending a conference he is speaking at to ask him a question? The question was obviously about Adrian's testimony. Larry states I am a threat and wants to end my life by putting my windpipe through my spine. He has also stated elsewhere that I am the most dangerous woman he's ever met. Interesting choice of words I am sure you will agree. He is obviously not physically threatened by me, nor is he averse to hitting or threatening women. I have been barred from the conference so I cannot ask Larry myself. I remember not so long ago Larry creating a lot of noise for being barred from the Halt in Woodbridge conference. Irony or hypocrisy? Not one of the organisers at SPI Scotland have told me I am barred. They haven't got the balls to tell me themselves and left it to the grapevine! Funny thing is, I was never going, I just wanted to see if I'd get barred to show Larry's hypocrisy. I never dreamt it would be delivered in this manner. If I am the one lying, why care about what I say if the data speaks for itself. 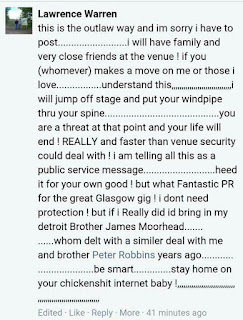 This is a screen shot of part of an email sent to me by Linda Moulton Howe regarding the transcription of a recorded conversation she had with Larry in 1986. 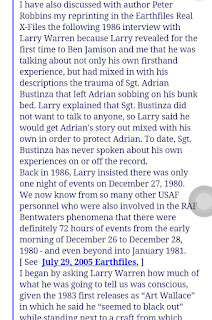 I will leave it here. You decide for yourselves.

It has been brought to my attention that Peter Robbins laughed off my comments about Larry being "Gassed and in a foot well" and smugly announced "nowhere in our book does it say... " 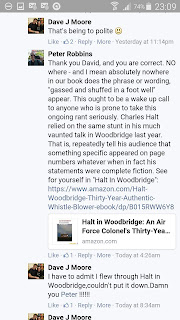 Here is what is said in LAEG 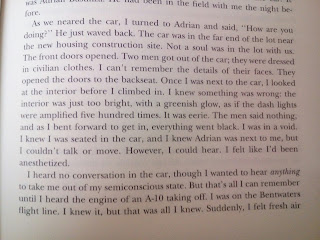 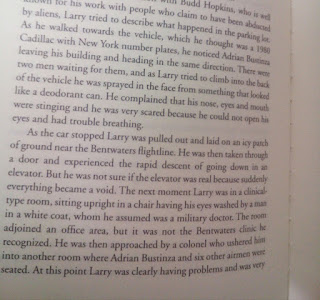 Obviously I have no idea what I'm talking about. Peter must think Larry walks around quoting excerpts of the book verbatim rather than having conversations using his own colourful vocabulary. LAEG is only ONE of MANY books written about the incidents.

Adrian Bustinza left a comment today on a thread about this blog. "Our brothers who are bent on taking ownership and credit for something that others experienced" "John and I! not "Larry and I" 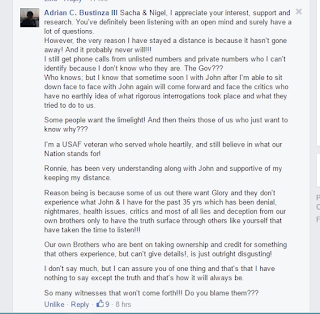