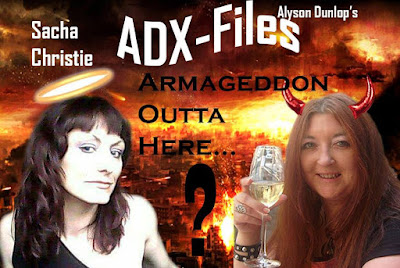 Well after four, two hour hit pieces about myself, the law of averages and irony kicked into effect. Today I joined Alyson Dunlop on her show to address a few matters and try, in the short time we had, talk about as much of it as possible. No way could everything be covered but we did our best in the time allowed.

I know it is a strange turn of events but then that's life.

Since the broadcast of the show Philip Mantle pitched an indignant fit about my comments regarding him. I said he doesn't believe that ET have ever visited this 3rd rock from the Sun so how can he believe they landed. You would be forgiven for thinking that was my terminology, no it is Phil's. he demanded to see my evidence so I made it a cover photo. How do I know he doesn't tell people this before he takes their account and write about it? He was the first person I told along with Russ Callaghan as I explain below, my account was published in UFOData #2.

In 2005 I talked about our group UFO encounter on a forum. Soon after that I had made loads of 'friends'.. some are still friends today. I ended up on another forum. UFOData which was brilliant. Soon after I went to meet Philip Mantle and Russ Callaghan at the Hilton Hotel in Garforth and told them about what had happened to us. It was a relief to have told someone 'significant' and in the know about it and to have finally found someone who believes me and they know what they are talking about.

I had been talking with Russ via email and in the second edition of UFOData Magazine, he published an article about our encounter based on what I had said, using my own words. I thought it was great, finally I could openly live with the thing that almost killed me and actually killed on of our group.
By the next issue, a couple of articles I had written myself were published and became an official part of the UFOData Magazine team . That was such a brilliant time, I really enjoyed it. I liked everyone, there was an element of fun attached to it now so it was overwriting the horror. After a short while things were going off in my life and I dropped out of the Magazine and sadly it folded about a year later. That still disappoints me that it didn't take off as it should have.

Over the years a couple of things upset the apple cart with Philip Mantle for a couple of friends of mine, but after points were made, things moved on. Then one day I was in a conversation on Andy Roberts page, when I read the words in the screen shot below.

So when I say Philip Mantle writes books about peoples accounts but he doesn't believe them it is with good reason. If I knew this was how he felt, I would NEVER have told him.
He asked me not too long ago if I would write about our encounter in Wales because he is writing a book about UFO LANDINGS. He doesn't believe that happens. I did not contribute, I thought about it because after all Phil was the first "Official Person" (as I initially perceived him to be) I had told, it would be some kind of full circle. But then, He doesn't believe it! He blocked me some time recently. So if I had contributed to his book about UFO’s landing, he would be selling it now and I would be blocked. Malcolm Robinson did the same thing to ‘Scully15’ recently. She contributed to one of his books and he blocked her from his Facebook page. Things got heated in SPI Scotland and she was removed from the group. She was then accused of sophistry for asking reasonable questions!! Scully contributed one of her accounts to his books which he still sells.

He didn't tell me his thoughts and feelings as he so freely told everyone who might pass by that comment that's there forever. Ultimately I found out when I read that comment. So... there you have the reason for me saying on the ADX files show with Alyson Dunlop that I think Philip Mantle's behaviour is disingenuous.

Russ Callaghan has always been straight down the line with me. So this is not about him in any way shape or form, it is about my experience in the UFO community from the very beginning, and why I see it as I do. I am not anything other than a witness and an experiencer. No book.. No conference. None of that. It is my life not my profession and I can talk about anything that has happened to me, the above happened to me.

After hearing the show Philip approached Alyson and asked for a chance to respond and she informed me of this. So I suggested we actually debate this together on Alyson’s show as she had agreed to give him a chance to retort. I said, well, I would like to retort his retort because the evidence speaks for itself. Having been at logger heads ourselves in the not too distant past, she knows i am not some screeching hysteric who doesn’t know how to talk to people, not like certain people I could mention.

A ridiculous conversation ensued on Alyson’s FB page with Phil Mantle refusing to unblock me to talk about it, she had to screenshot his message, post it for me to see, then she had to screen shot my reply for him to see. It was beyond pathetic. Within about five minutes, she was blocked too. There will be no debate between Mantle and myself because he can’t handle that kind of conversation and he really should be putting this right, I mean was he lying to Andy to seek his approval or is it more likely that he meant it and really doesn’t believe the stories he collects and sells?

If you want people to speak highly of you, you need to behave better.

As a witness, I haven't only witnessed UFOs, I have witnessed at close range and have many times been subject to, the behaviour of certain personalities for ten years! Now that might not be as long as everyone else, but it is long enough for me to see that it is nothing but a pond of piranhas in a feeding frenzy.