Larry Warren's Military Records are Definitely Tampered With. Facts to follow on the HPANWO show with Ben Emlyn-Jones & Warren 11th May 2017. 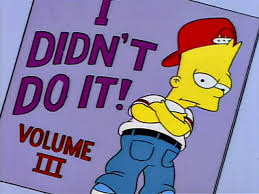 Due to the many inconsistencies of Larry Warren, we decided the best way to end the controversy would be to have his documents analysed. We had several hope-filled times where it seemed the analysis was being done, waiting patiently for the final result, only to be told weeks later that they couldn't/wouldn't do it.

One analyst said no thank you, Larry Warren is a very dangerous man. I fear for the safety of my staff, myself and the reputation of my firm. Another said we will only work from the original documents, but he also stated that just glancing over them there were definitely concerns and these warranted investigation. Another lady said yes I'll do it then four weeks later stated she couldn't, she was too ill and we were back at square one again.

Warren point blank refuses to show them or have them looked at, yet states he has the originals and they do not match the ones in his book or on the net, which is where they have been without complaint up until recently.

It doesn't really matter in the end. This week in one of Warren's insanity rants he stated the documents HAVE been tampered with. He then says that Peter had them for years. Now this is the fascinating bit. IF Peter has tampered with Warren's documents, he has managed to emulate Warren's writing! While they were partners, Peter set him up?

Okay, these documents we have, they are from Warren's book. They match exactly. Now I think he is talking about the Echols medical sheet in his rant. The copy I have was in Georgina Bruni's collection and is the original with tippex. In the book the document is exactly the same only you can't see the tippex.

He also stated this week that I had somehow fabricated Adrian Bustinza's comments made to John Burroughs on his post in a group about the Rendlesham CNN documentary. I am not a member of that group and therefore cannot post in it. but somehow I have managed to. Or maybe I am in league with John Burroughs..... Maybe the fact is quite simply, Larry Warren is a liar.

Screenshots of the conversation were sent to me and somehow Warren is going to prove I altered Adrian's words and also his comments on the radio show. I embedded the show on my blog, Left Out At East Gate, the upload is not mine. I haven't downloaded it, edited it, re-uploaded it. That would be a copyright infringement besides everything else.

So according to Warren I faked all his photos, faked his artwork, stole it, sold it in an auction he sold items in too, yet he got all the other items sent back to him from the same auction lot and sold items in the same auction I managed to sell a painting I stole from him in too in 2013? I tampered with the A10 photo too, I messed with all his stuff. Okay lets look at what that is saying then.

All of his evidence and items are all tampered with, altered, fake, stolen. He is an innocent man. We all set him up while we were still friends and supporting him rabidly. That makes complete sense if you are a total moron. I am a thief, a drug addict, a child abuser, an ex mental patient, mentally ill housewife who's mum locked her up for a year because she didn't know what to do with her. I am a forger, All total lies.

He states I have never had an experience in my life, never seen a UFO, never helped anyone, I just destroy lives. He has a problem with my tits and teeth for some reason, says I love him and this is all over that. Said he was telling myself and partner off for us taking drugs in front of the children in our filthy hovel and that is why he left. The opposite is true. Dave kicked him out for his constant atrocious behaviour caused by drinking and cocaine.

So here is the latest set of screenshots; 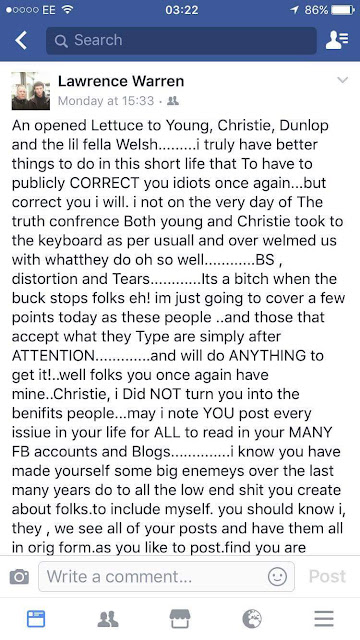 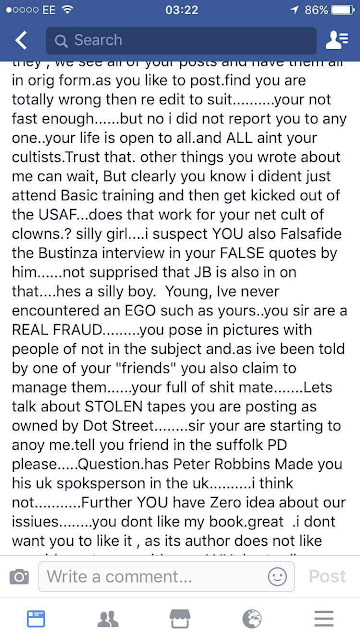 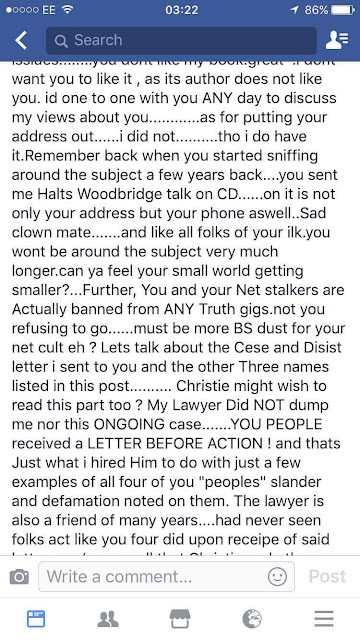 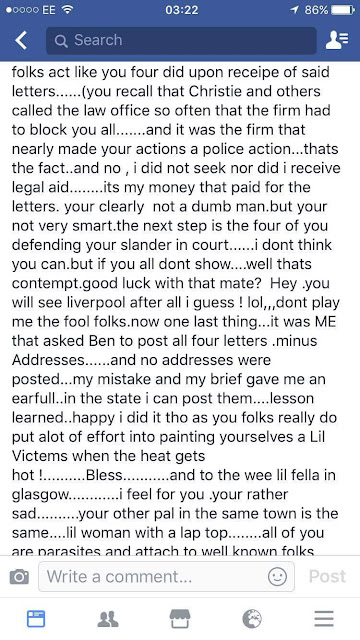 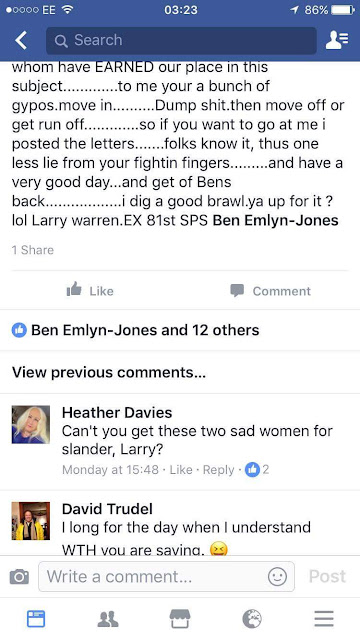 *Please note, I cannot see warren, he can't see me either. These screenshots were sent as is but they're damning enough*. 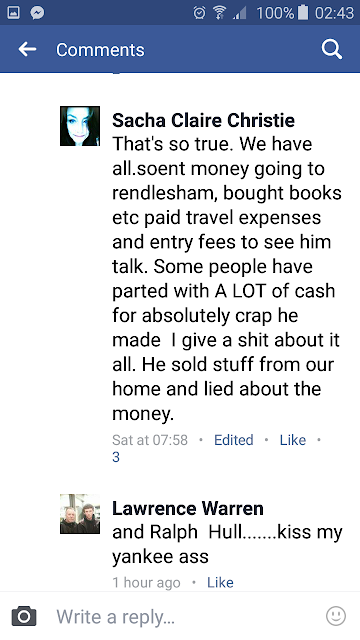 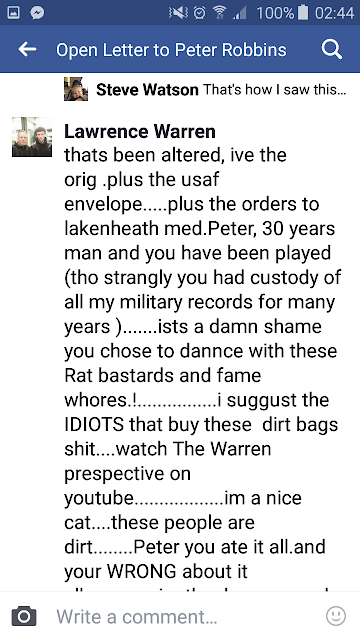 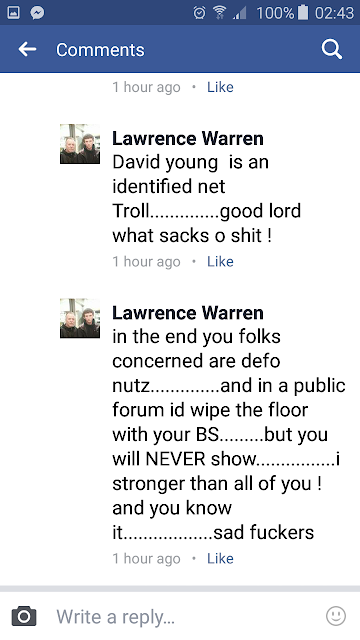 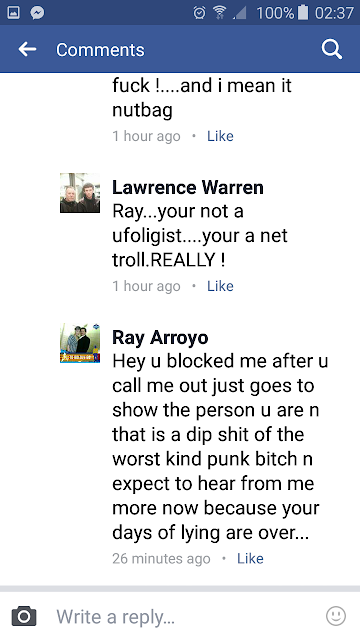 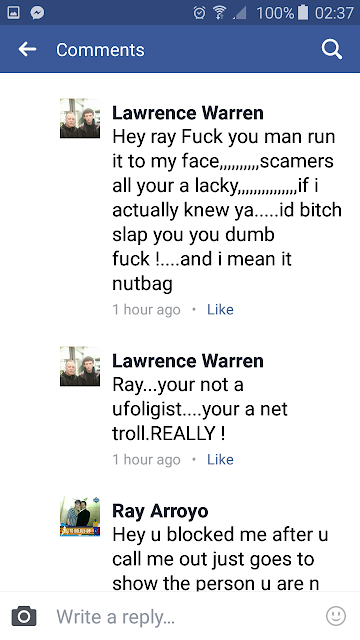 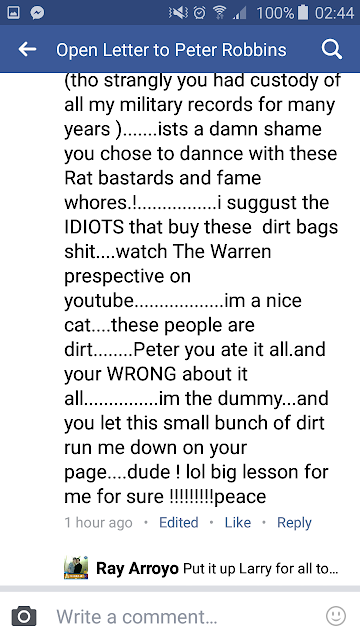 Well from the horse's mouth himself. It is all tampered with. That means he needs to start producing his evidence and military records to show the alterations. He states himself he has the originals. He needs to show everyone what he is talking about then.

He is now attempting to make things look like I and others set him up, but in reality he is trying to turn his lies onto everyone else. He is setting me up. Now it looks like he is going to turn it on Peter too.

Peter will be making a statement in due time. We have spoken since my blog . I understand how difficult this is for him, I went through the same thing. Only my aftershocks will not be as many or as deeply affecting as Peter's. He stood by him for just short of three decades. If I can understand his position right now, I hope you would stretch yourself to that open-mindedness too.

So tomorrow, which will be Thursday May 11th 2017, Warren is being given another platform to lie by Ben Emlyn-Jones on HPANWO radio. He is going to state the FACTS. Please don't miss it, it might be the 'best worst'  broadcast in ufology, ever. A very public Swan Song. It's not a live show but there will be a chatroom. Good luck asking a reasonable question though!

Today Mick Sayer (finder of the UFO in the A10 photo) found a very interesting bit of information.

Dr Echols definitely worked at Lakenheath, only he was an orthopedic Dr, NOT an Opthalmologist or Osteopathic! 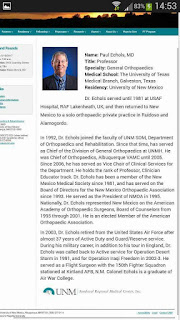 Warren states that he has the originals, the same originals Peter had that he alludes to him having altered, This means that the original documents have been tampered with. The ones he has. So there was literally no point in continuing further.

Nigel Mortimer reared his head again, trying to make out I'd stolen the six hundred pounds raised for the analysis. Even Tony Topping, friend of twelve years chimed in about it. Tony was told to remove me from his life by Mortimer or he couldn't speak at the conference that never happened.

Tony sent me a freind request a little while ago, no message, no phone call. I deleted his request, I can't respect that. So now he is there telling Mortimer to look into things, making out I am a thief too. Personal friends since 2005 and he throws me away then acts like I've harmed him in some way! Shameful. 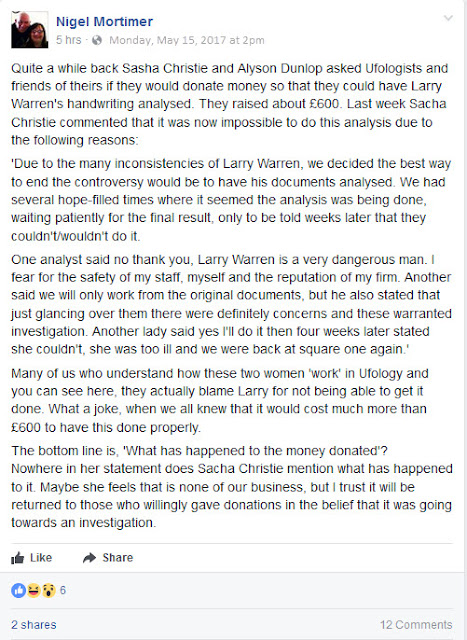 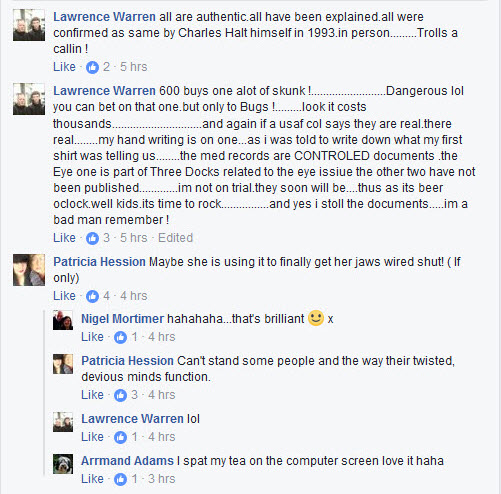 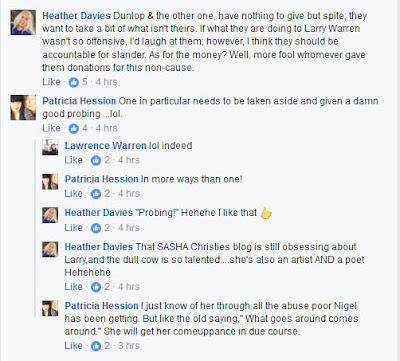 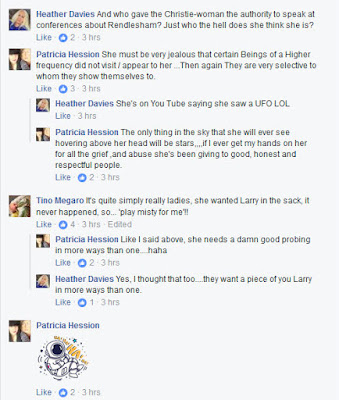 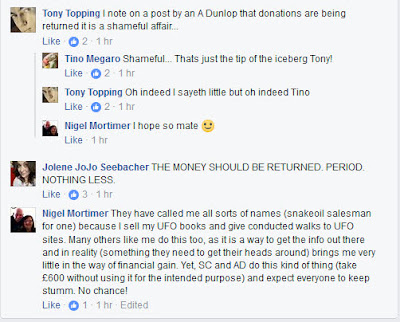 Everyone was given there money back within an hour of our decision. No one is going to get the names of those people, that's always been confidential. We have said publicly many times it has been returned, if that was a lie you can be sure people will have said so. Some of them are friends of Warren's, they would be the first to yelp about it. I never had any access to it anyway!

Absolutely no reason for them to come up with any of this. It's just pointless noise making to make me look bad because all of the above is completely normal, rational behaviour obviously. Oh yeah and of course in the ten years we were friends and all the times i was single I never once wanted any kind of physical contact from him.

Nor did I move to Liverpool following him, I moved here to be with Dave. What I did say to him was that when i was weighing up the decision to uproot my family to a city I didn't know very well, was that at least I had one friend there. How wrong I was about that, but the move to be with Dave was the best move I've made in my life.

Believe the gossip, it is A LOT easier than using your brain and doing your homework isn't it? It also says everything about them and nothing about me. They're like giant nine year olds with Tourettes.