Alyson, Through The Looking Glass.

It has been a challenging day today I must admit. Not the kind of day I was anticipating at all. I logged into facebook around midday, the amount of message notifications gave me a sense of forboding, quite obviously, something had occurred. What now?! Expecting to see various versions of the same event in screen shots etc,  I was surprised to find a message box full of “Attachment Unavailable” posts. Not the usual at all. Fortunately someone knew I wouldn’t be able to see the post because I am blocked from whoever is causing the fuss, they sent me the text while another friend sent me a series of screen shots after I mentioned that I couldn't see the post.

Alyson Dunlop of SPI Scotland and ADX Files Enemy Within radio show had issued a statement about Larry Warrens recent conduct. I was stunned by what I was reading and obviously I had conflicting emotions, I found myself picking on the things she was saying. I read it again a little while later, I talked to people about it, listening to their thoughts on what was wrong with it and also what was right with it. With my head in a spin I decided to log off and have a think about it.

So I will tell you what I think is wrong with it. Absolutely nothing. What is right with it? Absolutely everything. It is an apology, she apologises several times throughout. She outlines clearly the absolute truth of events and after reading it several times I can see where she has had to do some real soul searching. Is she being self servative? Yes of course she is, but she is also being equally community minded. You can argue she is doing this because of up and coming engagements, a lot of you have. I can understand that, especially in the context of the setting, which was most definitely an apology.

She has just done exactly the same as I have done. I can’t take the moral high ground when I have supported Larry Warren for just short of a decade. Because of recent events I have been talking to Col Charles Halt and I apologised to him for calling him Col Slanders! Fortunately he has a sense of humour and I have been happy to be able to talk to him personally after all these years of conflict, all caused by one man.

How can I say to people that we need to drop our politics and reunite because we have been pitted against each other by one man, while rejecting the very thing I would love to see happening? I would be a total hypocrite and I also think it would be a form of bullying. When I look around and talk to the main personalities here in the UK, I find that each one of us has been poisoned by politics, caused by the intentional disruptive actions of one person who does not want us all talking. Look at what happens when we do talk. The truth happens.

There is no such thing as ufology in this country at the moment. Not really. It's so fractured, competetive. Bitchy, disdainful and ultimately gains no ground in this childish tit for twat mentality that is the paid for face of ufology! Collectively ‘the scene’ is supposed to represent us all but just ask around, it serves no one. Conferences dying year after year and I hear American groups wanting to come here and give us what they think we want. We could all have exactly what we want if only everyone would stop seeing every single persona as a threat and denigrating what they do, why you think they do it, while sneering at them and promoting total frauds. There is room for everyone’s story, for everyones personality and more importantly for everyones research. If there is no money to be made then what is it they are protecting? If it's attention then there is definitely enough of that to go around.

So do I reject Alyson and reel out the pedantic semantics? No. I applaud her for what she has done. I can see where her writing went from being bold then into total sincerity and I hope that it does go some way to repair the damage of peoples perceptions. After all, I have been Alyson myself in the past. When I realised how terribly wrong I was and that I had actually contributed to the mess and also carried the very thing I fight against, I started to put things right. I did the right thing and only good has come of it no matter how horrible it was and is, to go through. Once you see him in full colour, there are waves of realisations that hit you, the layers and depths of deciet literally beggars belief.

If we stand apart nothing will ever change and he still gets to be the crack in the wall. British ufology lost it’s way, became fractured and almost nonsensical. So although I do not agree with every sentiment and word in her publication, I accept them all because all she is doing is exactly what I did recently and I will not fault that. The detail and honesty in those words literally speak volumes. I mean that sincerely. This is not meant to be some holier than thou acceptance speech either I just feel that this is the right thing to do. I am so sick and tired of the playground games. We ALL are.

Alyson, you have bigger balls than any of the men you have been associated with in recent months. Kudos to you. The one thing I really do feel is missing from this statement is the inclusion of two people, Ronnie Dugdale and John Hanson, due to the things said on the ADX Files enemy within show episode 24. This show was transcribed by a Canadian researcher who made observations, not accusations. It is time that we all stopped saying obvservations are accusations and questioning is attacking.

It's the little things that make a big difference in the end. I am sure you will agree, we don't need a common language, communication is only a problem if you pretend it is. What we need is new behaviour, a new Ufology and so we should lead by example. This is my attempt at doing just that. 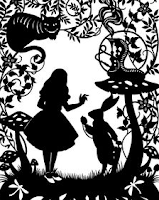 “She who saves a single soul, saves the universe.”
― Lewis Carroll, Alice's Adventures in Wonderland & Through the Looking-Glass