To Tracy Farley the RFI Lolita (wanna be) 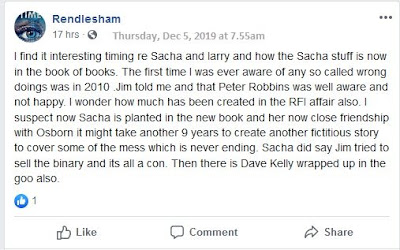 You can't figure out the simplest of things can you?

So desperate for some attention, you sit in a bucket of your own fecundity crying out for attention. Well here you are you've had some attention you sad article.

Endlessly posting about the one that couldn't get away from you fast enough because you lied and manipulated him.. You're a saggy old lolita wanna be with absolutely no life whatsoever.

Endlessly posting about something said 10 years ago. If you have the emails you know the story, I can't even remember and don't care because it's utterly ridiculous gossiping nonsense that only matters to you but you don't matter to anybody.

You've slept with.. sorry...had sex with and tried to bed them all to get information and you FAILED.

You are a FAILURE and a sad middle aged nobody who's only value to the public is endless "omgs whats she on about now" about you and your pathetic ways. "Oh god rumpledforeskin is stamping her foot again"

Nobody cares. Nobody is interested. You're all alone with you witter page and nobody gives a flying shit.

You can mention our names a million times, which you will, and nothing will change because nobody is going to talk to you about any of it. So carry on and on and on and on.

You are the single most jealous blob of nothingness I've ever had the misfortune to have experienced.

You're a failure like Larry Warren. A nothing. Not even a real person. Just empty nothing.

Planted in the new book? I'm in loads of books because of my research. You're in a book because you're a sneaky tramp.

You get back what you put in and that's why you'll never have, or do, anything of any worth.