Important Information regarding The Randle Tape. Larry Warren FAILED the VSA he claims Fawcett arranged. Here is the PROOF. Updated.

Recently a recording of a conversation between Larry Warren, Peter Robbins and Charles Halt surfaced. Warren denied this conversation took place, he demanded Kevin Randle release the recording and he would fold, Kevin released the tape, Warren then realised it is the recording he already has.  However, there are lies being told about that conversation now.

What is so important about this tape? Certain people are saying, it is nothing new, but those people know nothing and that is why they are saying that. They have both attached themselves to this for the attention it brings. One attaches himself onto the lives of other people, sweating and heavy breathing all over them while he grabs some attention for himself, the other one sells his wife's genitalia in little soft porn snippets to the UFO community  then demands £20 for a bit of fluff, spamming TTSA posts, then cries when people think it is pathetic and inappropriate and they say so. But then they are all the same. Warren sells rock star stories to the UFO community, so why not sell your wife too. They think you are all too stupid to notice they are using you for their own gain.

So for those people, here are the FACTS.

In this recording Warren tells Charles Halt that Larry Fawcett had arranged three voice stress analysis' of Warren and that he had passed them all. Well that is a total lie and anyone who had bothered to do the research they say they have would know this, this is not new news. 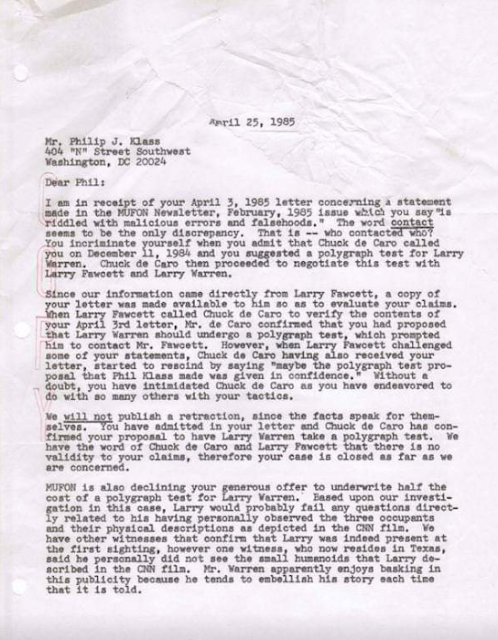 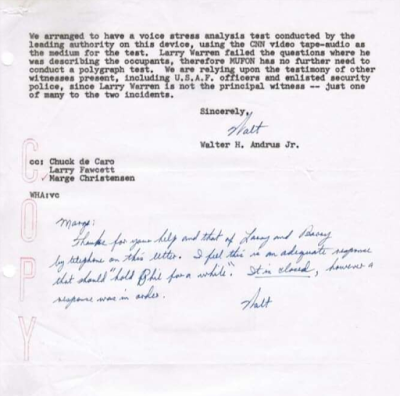 I am in receipt of your April 3, 1985 letter concerning a statement made in the MUFON Newsletter, February 1985 issue which you say is "riddled with malicious errors and falsehoods." The word contact seems to be the only discrepancy. That is __ who contacted who? You incriminate yourself when you admit that chuck De Caro called you on December 11, 1984 and you suggested a polygraph test for Larry warren. chuck de Caro then proceeded to negotiate this test with Larry Fawcett and Larry Warren.

Since our information came directly from Larry Fawcett, a copy of your letter was made available to him, so as to evaluate your claims. When Larry Fawcett called chuck de Caro to verify the contents of your April 3rd letter, me de Caro confirmed that you had proposed Larry Warren should undergo a polygraph tests, which prompted him to contact Mr. Fawcett. However, when Larry Fawcett challenged some of your statements, Chuck de Caro having also received your letter, started to rescind by saying "maybe the polygraph test proposal that Phil Klass made, was given in confidence." without a doubt, you have intimidated Chuck de Caro as you have endeavoured to do so with many others with your tactics.

We will not publish a retraction, since the facts speak for themselves. You have  admitted in your letter to Chuck de Caro and Larry Fawcett that there is no validity to your claims, therefore your case is closed as far as we are concerned.

MUFON is also declining your generous offer to underwrite half the cost of a polygraph test for Larry Warren. Based upon our investigation in this case Larry would probably fail any questions directly related to his having personally observed the three occupants and their physical descriptions as depicted in the CNN file. We have other witnesses that confirm that Larry Was indeed present at the first sighting, (since retracted he now says he wasn't involved in the first event, Bustinza has also has made further comment that he now thinks warren recorded him speaking and absorbed his experience) however one witness, who now resides in Texas said he personally did not see the small humanoids that Larry Warren described in his CNN File. Mr. Warren apparently enjoys basking in this publicity because he tends to embellish his story each time that it is told.

We arranged to have a voice stress test analysis test conducted by the leading authority on this device, using the CNN video tape-audio as the medium for the test. Larry Warren FAILED
the questions where he was describing the occupants, therefore MUFON has no further need to conduct a polygraph test. We are relying upon the testimony of the other witnesses present, including U.S.A.F officers enlisted and security police. since Larry Warren is not a principal witness- - just one of many of the two incidents.


Well we know he wasn't involved in these incidents because by his own admission he wasn't even on base or on duty until the 28th, unless he is telling the version where he is in Ipswich, UK during the day. If you read my article in the latest Outer limits Magazine ,you will see how unlikely it is he was on duty as he had a congenital defect which meant he couldn't straighten his arm and so was discharged from the forces permanently, no re-enlistment, all from his own documents he has shown over the years

But to the point of this blog. Larry stated Fawcett arranged three VSA tests which he passed. That is the lie.

Listen to the tape yourself. Forward to 7m 59s to hear him say he took three voice stress analysis tests through Connecticut State Police Department and passed, THREE TIMES!!


He also says at 4m 56s that he wasn't the first person to talk about the incidents, he was just the loudest, out of his own mouth, he is NOT the whistle blower.

At 7m 29s he says he stole his Military records, he previously stated he photocopied them and then told us that his records are unavailable. Well they are available, I checked, so I hope they got a fresh set from the DoD for the film Capel Green.

I could go on, I won't. This blog was just about the fact he lied about the VSA's and the fact that believing a liar does not constitute as an investigation. But then if you are an RFI noob believing Larry Warren, then you are at a severe disadvantage. Once again this proves these things are not coming from me, they are old, said by other people.

As the saying goes, you can lead an idiot to knowledge but you can not make them think. 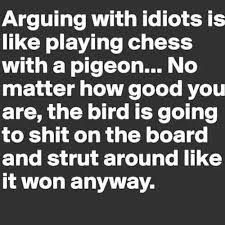 Just in case they say that a VSA ought to be done in person.

If Warren or Heseltine say that the VSA standard was not good enough because it is based on audio, then they have to concede the same regarding the very badly conducted VSA Jo Montaldo claims to have done, which I very much doubt he did anyway. However, it was conducted over skype and they wave that about as if it is a relevant bit of evidence.

I must be psychic..... So the VSA over skype is a no brainer 'no' too then? With a man who pretends to have a radio station. A man who lost all his show hosts after they dumped him for lying about the listening figures? I know this is a fact because I was one of them and we all left together, I say left, there was nothing to actually leave apart from a lie. 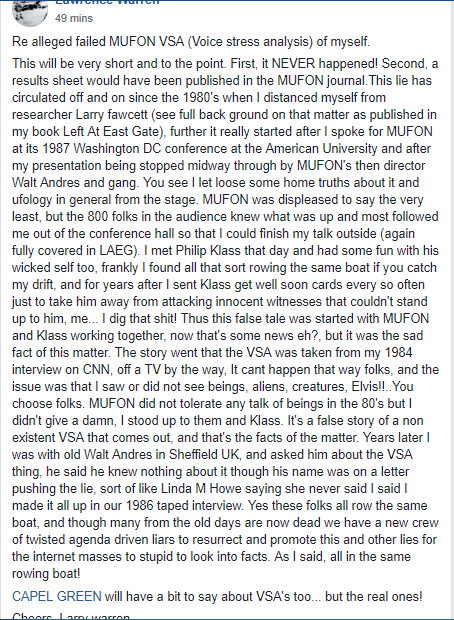 Another bloviator.... He says he has seen documentary PROOF that Warren was at Ground Zero. I look forward to seeing that then.

Phil mantle is trying to make a name for himself..... Is that the most ridiculous thing you have read? Phil has made his name, many years ago but then a total noob wouldn't know anything about anything would they? Comments like this show how cabbage looking he is.

Posted by Sacha Christie at 17:27 No comments: