All About Evan Jensen, Proof He Is A Fraud Blog

I have another attacker. Someone who thinks he can do damage to me after the others failed. Calling me names going to show me blah blah blah.. The usual.
Just as with the others who have tried to jump on this for their own gain, Evan has done the same. For months he has been telling us how he has millions of followers all over the world and that he is a fraud buster.
I have brushed him off endlessly. Reckons he is partially blind from a stroke, I do not know if that is true but what I do know is that he is a vicious criminal.
He first threw himself at me when he gave us information when Joe Montaldo and Chrtistina George joined in with Larry Warren, thinking they could take me down. Calling me a fake assed bitch etc. They failed too, one look at Montaldo's set up and you find there isn't one. Another one who lies about his stats.
I said all along I do not like him, I do not trust him but others were talking to him so I gave him the benefit of the doubt just this week. Then he starts calling me at midnight, I ignored his calls. I do not answer many people if they call me on messenger, I do not answer ANYBODY if they call me at midnight, unless it is my immediate family. 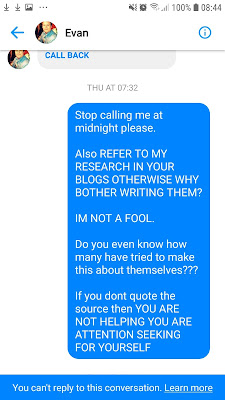 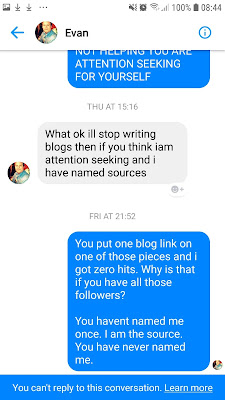 I started looking at his blogs. They are awful. Badly spelled, grammar is non existent, I know I am not the best either but I know I am better than that. He never included any of the sources he just helped himself to my material and represented it badly while telling us it is great he is a blind guy and has millions of followers over the world. I said to him last week, please link to my blog. the reason being is I did not believe he had had 22,000 hits. He just said it, yeah well been here before with people who say stuff.

Anyone who clicks a blog link to my blog, leaves information in my blog stats. I am not one of those bloggers who has stat counter anymore, I am really not intertested in the minutia of who reads it, but it does say where it has come from. If it comes from Above Top Secret for e.g, in the info it says Above Top Secret then the amount of times people have come to my blog from that site.

With many thousands of people at least looking at the blog of Evan's (as he claims) a small percentage would hit the link. I know this from the past activity. For eg HPANWO forums a whole 16 people came from that blog onto mine. I didn't get one single hit from Evan's blog. So I said I don't believe him.

Next came the search into Evans background. We discovered the truth. There is a blog about Paranormal Frauds. It is a good blog, thorough and well written. It seems that Evan is trying to mimic them. 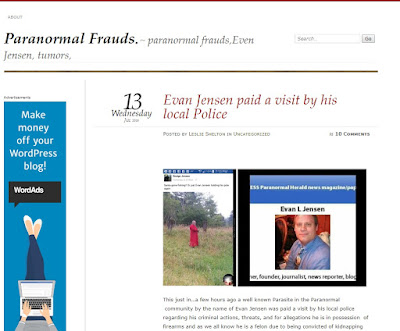 Evan Jensen is visited by the police Paranormal Fraud blog

I messaged him this week after however many brain vomits he wrote and told him to stop calling me at midnight and if he isn't putting my blog links into his blogs then he is not 'helping' anyone but himself. As I said, I never trusted him, my spidey senses served me well. Yesterday I asked where are the hits if he has all those followers and traffic. He said Oh I will stop writing then. Good I thought. Then I saw who he was and blocked him.
Evan is featured on a Stolen Valour blog. Outed as NOT being a Navy SEAL 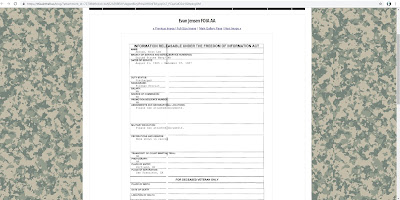 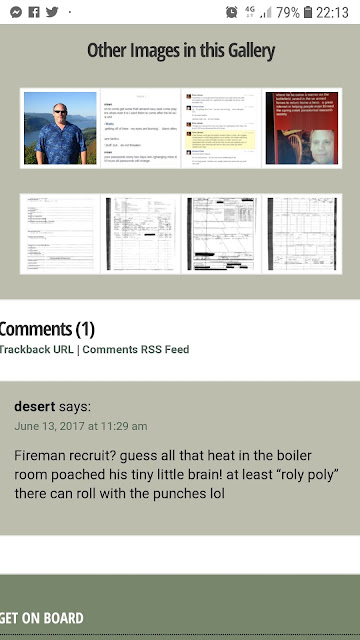 He messaged my friend David and told him how he was going for me now how he is going to make me look stupid with his badly spelled vicious spite. Good luck with that Evan. So he will now try and glue himself to Warren and Heseltine I suspect. They all do. So this guy is a cross bewtween Warren and Montaldo as he is a Walter Mitty and lies about his blog traffic, apparently he has a radio show too. He can prove me wrong can't he? All he has to do is screenshot his blog stats.


So now I am the focus of his never ending rage. Well good luck with that because I do not care if people hate me to the point of giving themselves ulcers, heart disease or a psychotic break. This is the internet and I know it well. I have been trolled for three years by no less than 50 people, all of them have blown up in their own faces and vanished from the scene apart from Gary Heseltine who seems to think he can attach himself to my life and then call me the troll. This was about something that happened to me because of Warren, Gary acts as if he owns the situation and it is all about him. He made it about him nearly two years after I called Warren out.

So Evan is going to make me look stupid with his vitriol... Because that always works right?

Check out the Paranormal Frauds blog